This paper presents the analysis of data collected based on a questionnaire. The data was collected to assess the individual understanding of authentic leadership. Data was collected using a questionnaire with sixteen questions that were pre-designed to ensure that information was collected with regard to four dimensions of authentic leadership. The four processes included the self-awareness perspective, the internalized moral perspective, balanced processing, and relational transparency. While the four phrases were not mentioned in any of the 16 questions, the researchers used a scoring tool which used the sums of the single digit answers provided by the respondents in the questions on the questionnaire.

To each of the 16 questions, the respondents were allowed to give an answer in digit 1 to 5 with 1 presenting a strong disagreement and 5 presenting a strong agreement. The lowest expected score was therefore expected at 5 while the highest score was expected at 25. To interpret the scores, the researchers focused on the range between 16 and 20 to read as strong authentic leadership and a score of less than 15 to read as weaker authentic leadership. The data will be analyzed, summarized, and discussed in the following few paragraphs.

The following pie chart presents the ages of the respondents grouped in the age brackets shown in the key area of the pie chart.

In the following few sections, this paper will look into the results of data analysis on each of the four dimensions of authentic leadership, focusing majorly on the descriptive statistics 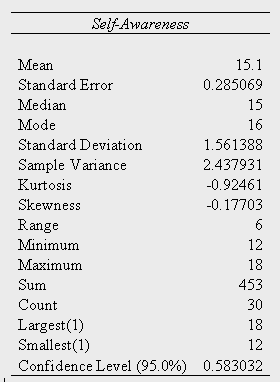 The analysis of the data collected for self-awareness from each of the respondents indicates that the largest score was 18 while the smallest was at 12. The standard deviation was 1.56 while the Mean stood at 15.1 and the median was at 15. The 95% confidence interval is at 0.58 indicating that majority of the respondents stand in the 0.58 deviations from the mean.

To rate the scores, the COUNTIF function in Microsoft Excel was used. It indicates that 14 out of the 30 respondents had stronger self-awareness while the rest 16 had weaker self-awareness. 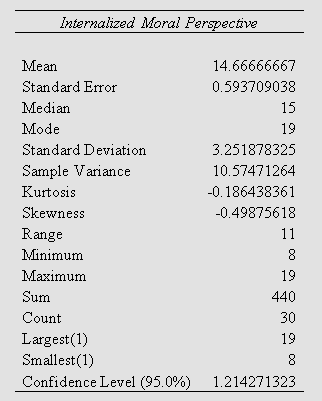 The analysis of the Internalized moral Perspective reveals that the sample had a mean of 14.67, median of 15, and a mode of 19. The standard deviation stood at 3.25 while the minimum and maximum scores were at 8 and 19 respectively. The confidence interval at 95% confidence level was at 1.21 points from the mean.